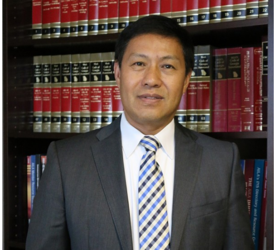 Người sáng lập và Tổng giám đốc, Jeff Z. Xie received his Bachelor of Laws degree and Master of Laws degree from China University of Political Science and Law.  He also was awarded his Master of Laws degree from Missouri State University and his Juris Doctor degree from Georgia State University.  He is an active member of the American Immigration Lawyers Association, and a member of the American Bar Association. He is a member in good standing of the State Bar of Georgia and the State Bar of Tennessee. He is also admitted to practice law before United States District Court Northern District of Georgia and the US Court of International Trade. Because of his outstanding achievements in representing higher education institutions, scientists, and college faculty, Mr. Xie was appointed by the Georgia’s Attorney General’s Office as one of only two Special Assistant Attorney Generals allowed to represent Georgia public colleges and universities on all immigration matters.  Mr. Xie has been invited to give speeches and hold seminars regarding immigration matters at universities and high tech companies in the United States. Mr. Xie has become a well-recognized immigration expert in employment based immigrant and non-immigrant visa matters. He has maintained an extremely high success rate on all petitions in the categories of National Interest Waiver (NIW), EB1A (Aliens of Extraordinary Ability), EB1B (Outstanding Professors and Researchers), and PERM Labor Certification.  What distinguishes Mr. Xie as a favorite lawyer of his business or corporate clients is that he, as a former business manager, has extensive knowledge and experience in compliance matters in immigration law and does his best to help his corporate clients comply with immigration requirements.